ITS Project Manager for ATM IDEAS for MTA Bridges and Tunnels 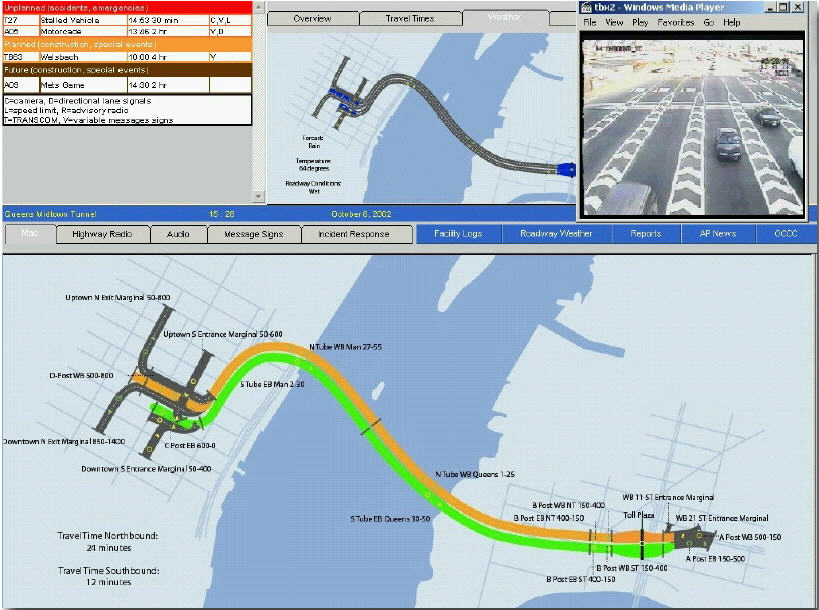 In 1998, when I was presented a draft of MTA Bridges and Tunnels (a.k.a., Triborough Bridge and Tunnel Authority) 2000-2004 ITS Capital Program, I noticed a key component missing: a software integration project to bring all of the planned ITS deployments together into one emergency/incident management system. I also realized that the new ATMS components of the division I worked for would dominate the next Capital Program, as E-ZPass had the previous Capital Program. I came up with a name for the system, the Advanced Traffic Management Incident Detect/Evaluate/Act System, or ATM IDEAS, and a logo,

that would lend focus and coherence to the project and its purpose.

ATM IDEAS consisted of a $1.3M Inspection/Quality/Administration contract, awarded to Dunn Engineering in 2000, and a $10.8M Design/Furnish/Install/Test/Maintain contract, awarded to Transdyn Controls in 2001. The project included the creation of a new centralized virtual traffic management center (TMC) on Randall's Island, interfaces to pre-existing and new ITS devices at all of the agency's facilities, and a Java-based user interface that was prototyped and tested with representative users early in the development phase. The design was completed in 2003.

Whereas most governmental agencies had deployed first-generation centralized traffic management centers in huge rooms with large video walls, ATM IDEAS was a second-generation decentralized traffic control and incident management system, bringing video, maps, incident logs and ITS field device status to the desktops of desk officers, desk sergeants, operations and maintenance superintendents, general managers, and upper management as well. Each bridge and tunnel had its own traffic operations center (TOC) server, in case communications to the agency network was lost in an emergency, and the virtual TMC server on Randall's Island collated incident data into a facility-wide view, and interfaced to outside agencies for city-wide traffic management tasks. Motorcades, amber alerts, severe weather conditions and city-wide emergencies would be coordinated by the virtual TMC, while each individual TOC might handle local incidents or concentrate on the local details of a larger incident.

There was national interest in the project, and a paper on the initial phases of the project (abstract and excerpts available here) was published by ITS America in 2003.

My title at MTA Bridges and Tunnels changed from ATMS Project Manager to ITS Project Manager when my entire division was moved from the Engineering and Construction Department to the Technology Department. I was employed at TBTA from 1998 to 2003. While at TBTA, I also managed:

I also was my division's representative on:

Inside the agency, I served on the diversity committee, and chaired a committee to create new CSI contract sections on fiber optic cables and fiber optic cable systems. I drafted the memorandum of understanding between the ISO 9001 Engineering and Construction Department and the new Technology Department, and, after September 11, supervised the creation of new security procedures for the transmittal and use of sensitive documentation by outside contractors.

I represented my agency at several formal and informal committees and meetings, including the AASHTO ATS subcommittee, TRANSCOM technical committees, and meetings with NYSDOT, NYCDOT, DoITT, NYC Transit and Metro North. I gave a presentation to the New York City Municipal Engineers Society on the 2000-2004 ITS Capital Program, and regularly attended ITS-NY, ITS America, ITS World and TRB meetings, and continue to serve on the ITE Traffic Incident Management (TIM) committee.

Important: Barry is currently working full-time and is only available for small after-hours consulting contracts.